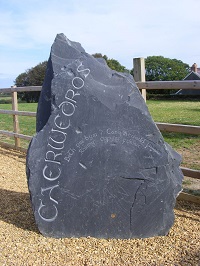 “What is life? Discovering a vast hall
within confined walls”.

Over the summer of 2013, renowned sculptor Ben Dearnley (who lived at Pensarn Chapel House) spent many months working on the Talking Stone project - a sculptured menhir which stands proudly in front of the hall.
The stone was kindly donated by the Croesheddig Newydd family and was transported from North Wales on one of Gareth Evans, Hafod Iwan’s, sturdy trailers. A few local characters pitched in to set the monument upright, and a (speeded up!) video of the process can be viewed on YouTube here.
On the front of the stone 'Caerwedros' is carved in Celtic script in monumental fashion. Beneath it is the above quote by Pembrokeshire poet, Waldo Williams.
On the reverse are carvings of local views and famous characters, such as the17th century smuggler Siôn Cwilt and Saint Tysilio who gave his name to the church above nearby Cwm Tudu. There are also depictions of a young farmer shepherding his sheep, and the sun setting over the local hills and shoreline.
You are welcomed to visit the hall to see the menhir and its carvings and explore the stories of Caerwedros.
Click here to see more pictures of the stone